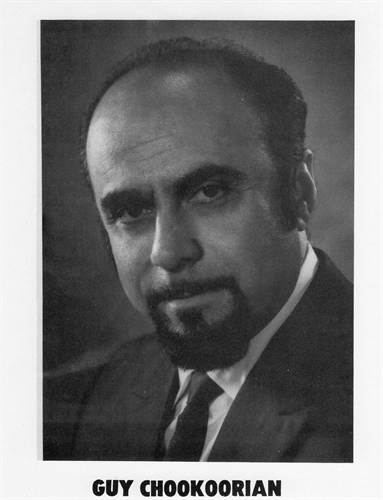 Well known Armenian-American musician/entertainer Guy Chookoorian was born in Kenosha, WI to Roupen and Srpouhi Chookoorian on November 15, 1923. Shortly after, the family moved to Waukegan, IL, where Guy spent his elementary school years. At the age of 12, the Chookoorian Family relocated to Fresno, CA. Guy attended Fresno Technical High School, where he was Student Body President, and graduated in 1941. Guy enlisted in the United States Army Air Corps and served during WWII as a radio operator-gunner. He flew 32 missions on a B-17 Flying Fortress.

Upon being discharged, he moved to Los Angeles, CA to pursue a career in acting and entertainment. In 1951, Guy married Louise Paul. They had two children. For 50 years, Guy served the Immanuel Armenian Congregational Church as choir director, while his wife Louise served as organist. Guy enjoyed a full and successful career in the music and entertainment industry for more than 70 years and was a proud life-time member of the American Federation of Musicians (AFM) and a long-time member of the Screen Actors Guild and American Federation of Television and Radio Artists (SAG-AFTRA).

Guy is survived by his wife Louise, Son and Daughter-in-law Arshag and Sona Chookoorian, Daughter and Son-in-law Araxie and Michael Marderosian, Granddaughter Ani Marderosian, and Grandsons Armen and Ara Chookoorian. Survivors also include nieces Ardemis Boyd Menendian, Marie Paul, Carol Paul Giacomazzi, nephews Armen Boyd Jr. and Aram Boyd, many cousins, and their families. Besides his parents, Guy was preceded in death by his sister Sue Chookoorian Boyd and brothers-in-law Armen Boyd Sr., William Paul and Earl Paul. Graveside services are private, while a public memorial service is being planned for a later date. Memorial donations can be made to Holy Trinity Armenian Apostolic Church, 2226 Ventura St., Fresno, CA 93721.

Share Your Memory of
Gaidzog
Upload Your Memory View All Memories
Be the first to upload a memory!
Share A Memory