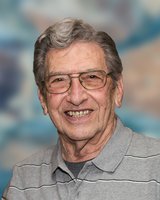 Peter David Caiola, Jr. (Pete), 88, of North Hills, CA, passed away peacefully on Thursday, April 16, 2020 at his home, where he has lived for 57 years. Peter was born in Frankfort, New York to Peter and Josephine Caiola on November 21, 1931. His parents immigrated from Sicily in the early 1900’s and he was the youngest of 7 children. He is survived by his four children; daughter Josephine (Jo) and husband, Dolan of Las Vegas, NV; Stephen (Steve) and wife, Michele Caiola of San Diego, CA; Maria Caiola of North Hills, CA and Anthony Caiola of North Hollywood, CA; his sister-in-law, Mary (Averson) Caiola of Frankfort, NY; his sister-in-law, Julie Simeti of Nanuet, NY and brotherin-law Jim and wife, Meg Filingeri of Frankfort, NY; Grandchildren Sean Ahern-Caiola; Patty Sittig-Huskins, Stephen Sittig and 6 great grandchildren and many nieces and nephews. He was predeceased by his wife, Carmela and his parents, Peter and Josephine Caiola; sisters – Marion, Mary, Mamie, Virginia and brothers – Carl and Anthony.

He married the love of his life, Carmie, on September 5, 1953 and they were married for 61 years before she passed away in 2015. His family owned a Italian store in Frankfort, New York and he worked there before he enlisted in the Navy. He proudly served during the Korean Way (1950-1954) , and was honorably discharged. 1959, he relocated to Los Angeles with Carmie, Jo and Steve. He worked in the Aerospace industry as a purchasing agent/Expeditor, and later as a manager at Hughes Aircraft Company/Raytheon in El Segundo, CA for more than 25 years and retired in 1989. He had several part time jobs where he worked at a local Italian Store, and with a friend who sold merchandise at a local swap meet. He coached several sports with his sons. He enjoyed telling good jokes and lots of stories about his days in the Navy and all his life’s adventures, which included his travels around the US and time spent with family and friends. I don’t think anyone would describe Pete as an introvert – he was more of a ‘social butterfly’. He was a great friend to everyone and genuinely cared about his friendships. He was someone you could count on if you needed help. In the early 1980’s he helped a friend make amateur wine and he won BEST OF SHOW for his Cabernet in 1982. He loved sports and his favorite was the INDY 500. Jo surprised him and took him one year and he loved it!!

He served at St. John Baptist de la Salle Catholic Church, in Granada Hills, as an usher/greeter for over 30 years.

Arrangements are being made by Rose Family Funeral Home in Simi Valley, CA. A funeral mass at St. John Baptist de la Salle Catholic Church in Granada Hills, CA on Friday, May 21st at 10:30am. On a later date another Mass at Our Lady Queen of Apostles Catholic Church in Frankfort, New York - followed by a graveside service at Mount Olivet Cemetery where he will be buried with his beloved wife, Carmie.